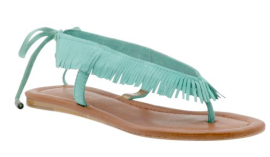 One of the biggest trend for Spring 2009 will be an updated version of last year’s Boho-chic and the Fashion powers that be have coined this new trend, Tribal.  I happen to love this concept and think that there’s no better time to break out the hippie inspired accessories like fringe bags, shoes, jewelery, etc….than during the upcoming warmer months!

I found these adorable flats at Piperlime but the $200 price tag totally killed it for me… until I recalled that I had spotted a similar pair of shoes at Wanted Shoes. 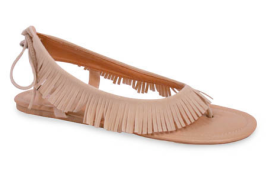 Their version comes in Black, Natural, Orange, Brown and it’s a dead ringer for the Cynthia Vincent ones at a fraction of the cost…$39.99 to be exact!

I totally expect this to be the sandal of the Summer to don’t hesitate to buy them just becasue there’s an inch of snow on the ground!

Filed under Look for Less